Running a baseline chromatogram done without sample or solvent injection should show a nice chromatogram without peaks, but sometimes Siloxane Peaks can be seen. The source of the peaks can be from many items:

The Column, Inlet Septa, Inlet liner, O-ring on the liner, ferrule of the column at the inlet or a dirty inlet.

Column bleed by definition is a continuous process that causes a baseline rise, not discrete peaks. There are other sources of Siloxanes, such as injection port septa and vial septa that can produce peaks. These are generally smaller polymers than the column stationary phase, and have different characteristic ions that column stationary phases. 207 is a very common mass for column bleed, while for vial septa masses 73, 147, 281, and 355 are common. 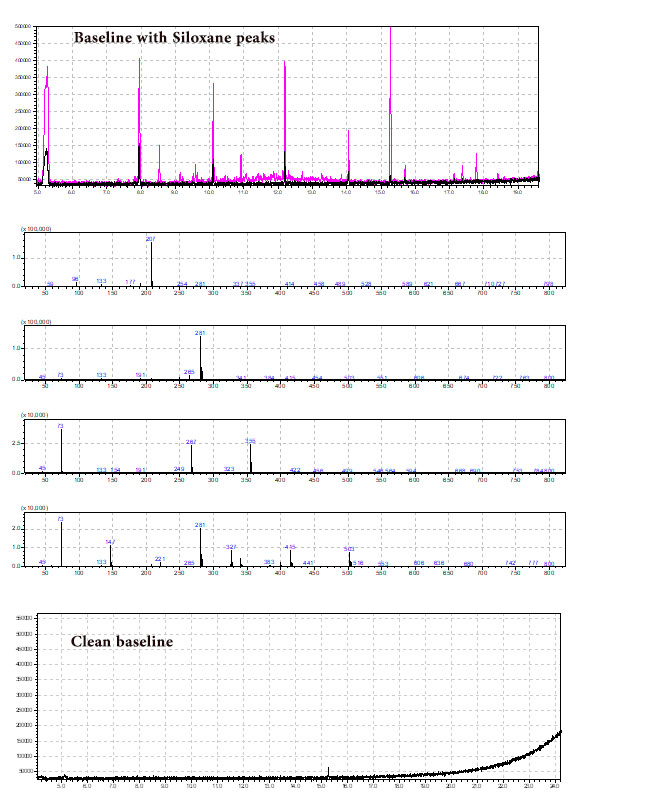 It is know that running high inlet temperatures (like Pyrolysis) will give even easier Siloxane peaks in the baseline. With each blank run the peaks will get lower as the source of the Siloxane will be cleaner after each run. A fast way to get a nice baseline is to inject some Hexane (cold) and slowly heat the inlet (6°C/sec) .

Was this article helpful? Yes | No